Fear, the class keyword, you must not!

Yet another TypeScript memory optimization story

So, my TypeScript patch that I wrote about previously was recently merged. This gave me quite some motivation to start up the profiler again, and look for some more wins.

Being able to memory profile JS can be considered a dark art sometimes, as even the TS team recognized in their current half-year roadmap:

much of what we discovered was also that profiling memory allocations in JavaScript applications is really hard. Infrastructure seems lacking in this area (e.g. figuring out what is being allocated too much), and much of our work may reside in learning about more tools

So I want to take this chance to highlight how I discovered another easy ~2% win just by looking at the memory profile and squinting really hard.

Most memory optimizations I did were the result of an informed guess, based on some assumptions. Followed by experiments to see if my guess was right or not.

That being said, these things are not an exact science, and they might work very differently on all the different js engines. But I will be focusing on node/v8 here, since I would guess that is the >95% case of how typescript is used.

The main thing that I focus on here is a few things that I learned by watching recorded talks about v8 performance:

So I just opened up a memory profile and started looking for anything that popped into my eyes. Here is what I saw: 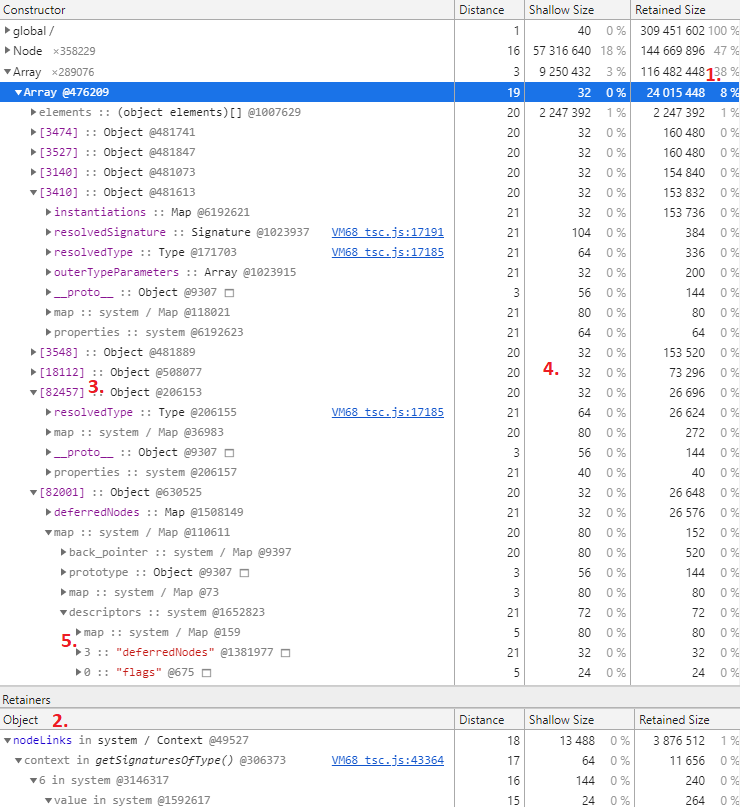 Now comes a wild speculation on my part, which turned out to be correct in the end: What if, instead of having anonymous objects, we actually create a dedicated constructor function? Will that help v8 to make better inlining decisions?

So I started looking at the TS codebase, searching for this nodeLinks variable.

The variable comes from checker.ts, which is too large for github to display so I can’t permalink it, but here it is:

You might also want to look at the definition of NodeLinks.

The NodeLinks interface defines 26 properties, of which only flags and jsxFlags are mandatory, and btw jsxFlags is not defined in the the getNodeLinks function, so there is null-unsafety right there!

Anyway, lets create a quick constructor function for all the NodeLinks, call it with new and see if it helped v8 better optimize the object allocations.

Since optimizing these cases is actually a lot of guesswork and shots in the dark, it is very important to also check what the results of the code changes are. So lets take a look: 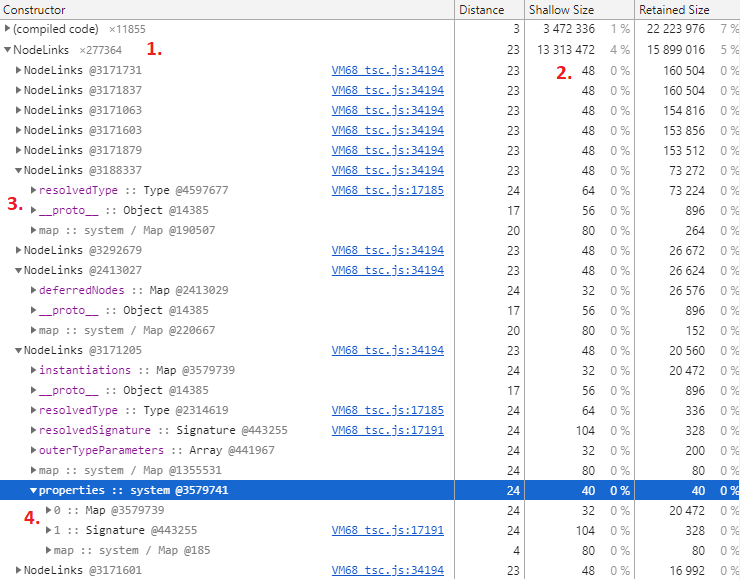 So from this quick look we can see that we were successful. The memory usage has dropped by a bit, and we how have all the NodeLinks grouped together, and at least half of them have all of their properties inlined, without the need for an external properties hashtable.

However, just by looking at the definition of NodeLinks, and at the memory profile, we can clearly see that there is probably no object that has all the 26 properties it could potentially have, but that they could most likely be grouped into separate types. I do see this general code pattern a lot in the TS codebase, the Node interface that I was previously looking at was another case. The TS codebase defines a very broad interface type, with tons of optional properties. Then is uses explicit and apparently very unsafe casts all around the codebase, and adds properties some time later, in a probably arbitrary order. Exactly the things you should not do, both from a v8 optimization standpoint, and a general type-safety standpoint.

Well there is probably a reason for it. The TypeScript codebase is ancient. I think it has been self-hosting since the very beginning? but it only had proper union types and strictNullChecks since 2.0, and strictPropertyInitialization since 2.7. Also, engines did not have native class support back then.

So from my perspective, there is quite some technical debt to be paid! I would very much suggest to embrace union types of native classes with initialized properties in the codebase. Or as Yoda would say:

Fear, the class keyword, you must not!

Well so long, hope this has helped some people better understand the memory optimization tools, and how to approach such problems.